From sharing economy to sharing responsibility

How venture builders are changing the startup model

The importance of shopping small

(If) I could get a new bike this would be it 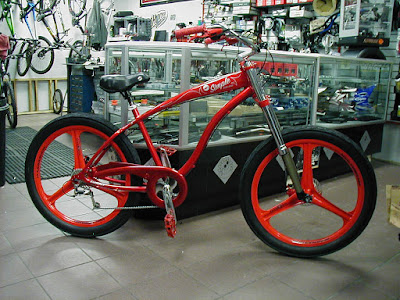 The Portuguese football club 'Sporting Lisbon FC' has recently contracted loyalty agency ICLP to update and reinvent its existing club membership card to include a new loyalty platform.
Sporting Lisbon FC was founded in 1906 and, apart from football, also works with many other professional sports including swimming, polo, and athletics. The new loyalty programme includes a new card that is branded Rede S3G (Sporting Third Generation), which acts as both a credit card and a loyalty card. dgoble This article is copyright 2008 TheWiseMarketer.com).
Co-branded card The new card has been co-branded with a leading Portuguese financial institution, which is also allowing the card to be used for pre-payments along with traditional credit payments.
The card will initially be targeted at the club's existing 90,000 named supporters through a direct mail campaign. Taking on a third role, the card will also act as an access control identity card for registered club supporters. Those who are not old enough (by law) to use the credit card element are able to obtain and use the card, but the financial aspects of the card are disabled.
Initially there are eight launch partners from which Rede S3G cardholders can collect loyalty points, including a country-wide network of petrol stations, travel agents, and a mobile communications brand.
Member benefits Points are redeemable only for Sporting Lisbon FC related goods and services such as game tickets and sporting merchandise (e.g. T-shirts and footballs). There are also frequent promotions and prize draws, with experiential prizes including spending an afternoon playing football with the team's goalkeeper, and a number of autographed Sporting Lisbon FC shirts.
In addition, there is a package of various direct benefits for cardholders, both from the club and from other companies associated with the club's new card programme. According to Stuart Evans of ICLP, "One of the key elements of a loyalty programme, especially with one relating to football teams which evoke strong emotional attachments, is to reward members with benefits that are not usually attainable. These have enormous cache and consequently an associated high net worth to the member."
The programme will also be launched internationally after its Portuguese launch, with the aim of reaching the football team's pan-European and even worldwide fan-base.
More Info:
http://www.iclployalty.com

The Portuguese team at the Rugby World Cup prove the value in having the so called minnows of the rugby world involved. They aren't actually minnows, they are one of the top twenty national teams playing rugby in the world. Their passion, committment and ability is outstanding in my view. Long may we have 20 teams in the tournament. So what if they haven't won a game, I'm inspired by these guys laying it all on the line for their team and country.
Labels: portugal, Portugal rugby, world cup

A successful debut at Westpac Stadium for the Wellington Phoenix in their pre season competition match against Sydney FC. Phoenix won 3 - 0 and reports are that the atmosphere at the ground was great - chanting, good crowd (6000+) and entertaining football. Thinking about a set of season passes. Match report.

Happiness is qualifying for the Rugby World Cup 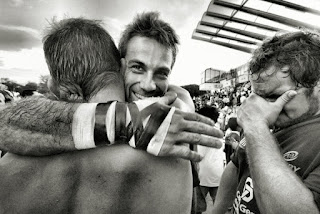 Great photo by Rui Palha of the Portugal rugby team after they qualifed for the Rugby World Cup.

Running is big business and there are loads of sites out there that are great resources for runners.

Adidas have launched their site adirun.co.nz that aims to provide runners with professional training and motivation help once you have bought some shoes from them.

A useful tool that some of the people in the office use is mapmyrun.com.

And now if you are a busy exec (or whatever) in a city in the US of A then you can hook up for a customised running tour cityrunningtours.com, americanrunningguides.com, pacificrunningguides.com of the town you are in.

Running buddies with local knowledge on tap where ever you are visiting. 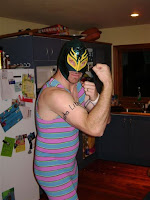 Unfortunately the wrestling bug bit again last week when my friend Andy "El Condor" Manson announced that he had a couple Mexican wrestling masks available for us to wear at the School fund raising Masquerade party. I think the picture speaks for itself.......

Suffice to say there was plenty of wrestling moves and big lifts during the evening. We are considering a new professional circuit based out of a local establishment.